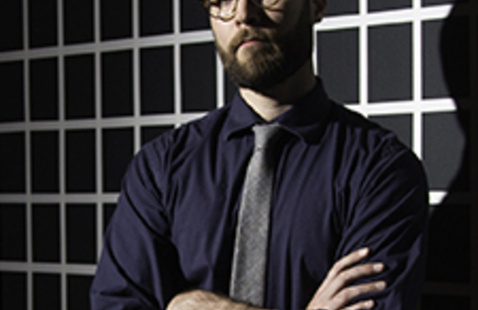 The Film Studies Guest Filmmaker Series persents "Poetry with Light: Recent Films by Ben Balcom," screening Monday, December 3 at 7:30 p.m. in the University Center Theater. The filmmaker will be present for the screening and an audience Q&A session.

Ben Balcom received his MFA in Film, Video, Animation and New Genres from the University of Wisconsin-Milwaukee, and his bachelor's degree in Film-Video Production from Hampshire College. His films have been exhibited at the European Media Festival, Anti-Matter Media Arts, Alhemy Film, Ann Arbor Film Festival and Slamdance. His work received the Black Bear Award for Best Use of Sound at the 2016 Athens International Film & Video Festival, and the Niagara Award for Best Cinematography at the 2015 Ann Arbor Film Festival. He is also a co-founder and programmer of Microlights Cinema. Since 2013, Microlights has hosted nearly 50 film and video artists from around the world.